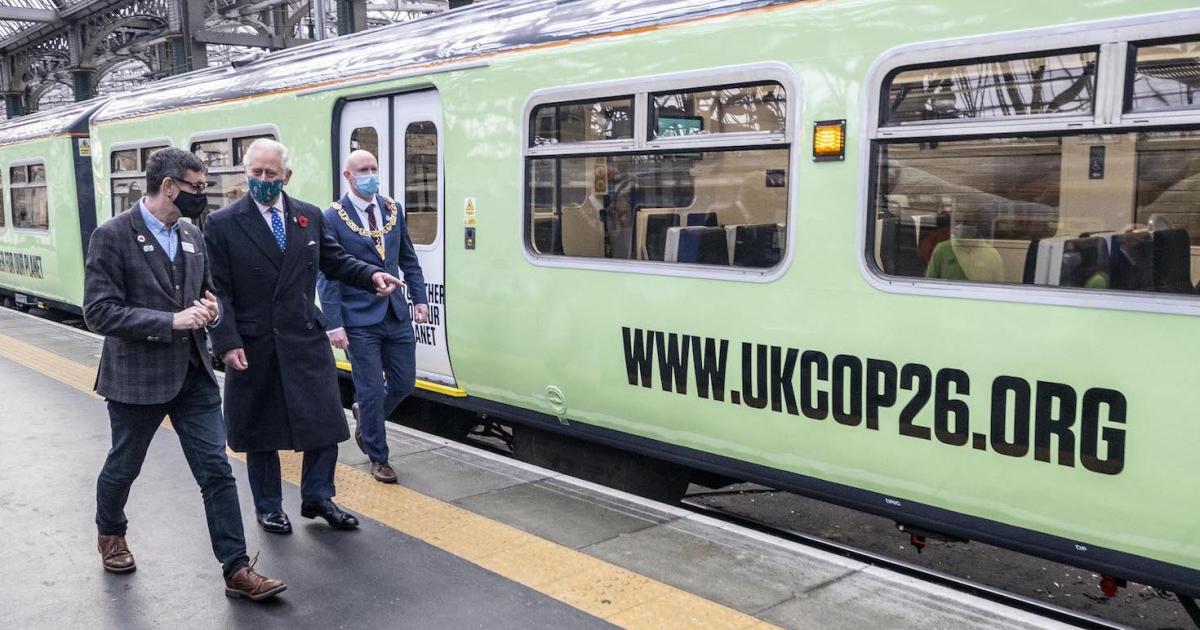 This article was adapted from Climate Tech Weekly, a free newsletter focused on climate technologies.

My biggest geek-out moment during the COP26 gathering in Glasgow, Scotland, last week came in the central train station, where I had the opportunity to briefly tour a 30-year-old passenger train retrofitted to run on hydrogen fuel cells and lithium-ion batteries — up to 300 miles at speeds of up to 100 miles per hour.

The technology, HydroFlex, was developed by a U.K. consortium orchestrated by Porterbrook, a leasing organization that owns about one-third of the U.K. rail fleet, alongside the University of Birmingham.

The total capacity of the system is 800 kilowatts, split between the fuel cells and the batteries, which can be recharged in a matter of 15 minutes. The cells run on green hydrogen, supplied by a British startup, and the interior is a model of circularity, including recycled seat frames and covers. So far, Porterbrook has invested more than $10 million in the initiative. The train attracted hundreds of visitors, including Prince Charles, who spent a number of days in Glasgow during the climate summit.

The interest in HydroFlex underscores the hopes some companies are pinning on green hydrogen as a method of decarbonizing transportation and carbon-intense industrial processes, such as fertilizer and chemicals production. During COP26, close to 30 companies coordinated by the World Business Council for Sustainable Development (WBCSD) and the Sustainable Markets Initiative (SMI) pledged to drive demand for — and the supply of — hydrogen produced using renewable energy, rather than the natural gas-powered methods that dominate the market today for “grey” hydrogen.

Under the so-called H2Zero initiative, at least 11 gigawatts of green hydrogen production capacity by 2030 was committed to by five companies, with the biggest pledges coming from Engie, Iberdrola, Enel and EDP. If used to replace grey hydrogen, the pledges could reduce carbon dioxide emissions by more than 14 million tons annually, according to the initiative. The potential for avoided emissions: 190 million tons of CO2 annually.

The pledges also include an existing commitment by fertilizer company Yara, which is building an industrial-scale green hydrogen plant in Australia with Engie in a bid to change the way it produces ammonia.

The “Hydrogen for Net-Zero” report released in early November by the Hydrogen Council and McKinsey estimates that renewable and low-carbon hydrogen could contribute up to 20 percent of the carbon abatement necessary to limit global temperature increases to 1.5 degrees Celsius by mid-century — that’s roughly 80 cumulative gigatons of CO2.

“The momentum in hydrogen continues to accelerate: Announced electrolysis capacity for 2030 has doubled this year and announced project investments increased to $160 billion, with total investments into the ecosystem estimated at more than three times that figure,” noted McKinsey Senior Partner Bernd Heid, in a statement. “In a path towards our decarbonization commitments, clean hydrogen demand can grow to 75 Mt by 2030; of this, two-thirds will stem from new markets like steel, industry, mobility, aviation, and maritime. To meet this new demand, we will see the emergence of new energy hubs and global value chains that enable a hydrogen market seven times its current size by mid-century.”

The momentum in hydrogen continues to accelerate: Announced electrolysis capacity for 2030 has doubled this year and announced project investments increased to $160 billion …

An example of what that might look like is a wind-powered green hydrogen facility in Bouin, France, being developed by startup Lhyfe. The company announced a fundraise of $57 million in early October to ramp production from 300 kilograms currently to more than a metric ton per day. The fuel will be used to power a fleet of 50 heavy vehicles, buses and garbage trucks from nearby communities. The company said it has 60 similar projects under development in Europe.

As I was finishing up this essay, concentrated solar company Heliogen and fuel cell company Bloom Energy announced the successful results of a demonstration project to create lower-cost green hydrogen. “As the price of hydrogen comes down to someday be cheaper than natural gas, you can use it to power everything,” Heliogen CEO and founder Bill Gross told Fast Company.

Can all this hydrogen hype hold water? After all, hydrogen has been offered up as a holy grail for decarbonization for decades. In a statement issued during COP26, Esben Hegnsholt, managing director and partner at Boston Consulting Group (BCG), noted that the support for hydrogen alternatives is still nascent.

“If hydrogen is to achieve its full potential, it must become less expensive and more efficient to produce, distribute and use,” he said. “Companies need to focus their hydrogen investments on use cases where cheaper technologies are not suited and where low-carbon hydrogen can be deployed at scale. For their part, governments need to develop a regulatory regime that encourages the deployment of low-carbon hydrogen at scale and in the right areas, and they need to ensure the build-up of the right infrastructure such as transport pipelines and hydrogen ‘gas stations.'”

In its own analysis of the green hydrogen opportunity (published in April), BCG projects that the technology could reduce 5 to 6 gigatons of greenhouse gas emissions annually by using clean hydrogen for chemical production and refining, for fuel cells in heavy vehicles and as a reduction agent in iron and steel processes. It figures that it would require about 600 terawatt-hours of renewable energy to power these new electrolyzers — a significant new generation demand.

Right now, however, the capital expenditures are not for the faint of heart. Currently, it costs about $5 per kilogram to produce hydrogen from renewable energy, a metric that inspired the U.S. Department of Energy to launch the Hydrogen Shot challenge in June. The goal: Reduce that cost by 80 percent to $1 per kilogram within one decade.

The venture capital for green hydrogen is more a trickle than a flood right now, when you compare it to other climate tech categories. Breakthrough Energy Ventures is backing a couple, including EvolOH (which is working on an electrolyzer) and Verne (working on storage systems). More recently, the Amazon Climate Pledge fund emerged as the lead investor in a $69 million round for Infinium, which will use renewable power to produce green hydrogen for use as fuels.

Another initiative to watch is the Low-Carbon Hydrogen Accelerator, launched last week by the Electric Power Research Institute (EPRI), Shell and the city of Houston along with two respected early-stage climate tech incubators, Greentown Labs and the Urban Future Lab. The six-month program is focused on supporting startups focused on production, storage and distribution, or new business models for supply chains — there are tracks for validation and demonstration.

“If we can improve the devices and processes that will be used to make, transport and store clean hydrogen in the future, it can become a cost-competitive fuel,” said Urban Future Lab’s managing director of cleantech initiatives, Pat Sapinsley, in a statement. “At the same time, these advances can improve the capacity factor of renewable generation, producing multiple economic and climate benefits.”

Applications for the Low-Carbon Hydrogen Accelerator are open until Feb. 9.

Longest Lunar Eclipse of This Century Will Take Place on November 19: How to Watch
Musk predicts first Starship orbital launch in early 2022
Why Does It Take So Long to Get to Mercury?
How to turn your ideas into patents
Presidents of Royal Society live long lives