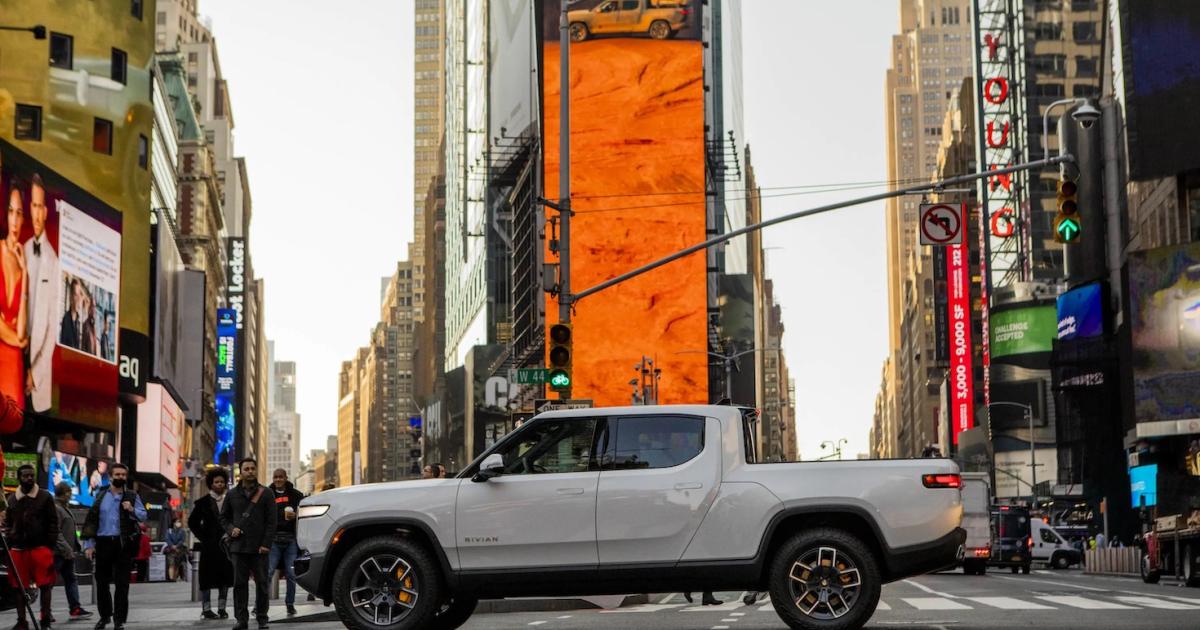 This article was adapted from Mobility Weekly, a free newsletter on decarbonizing transportation.

Electric truck and van company Rivian’s breathtaking and record-breaking IPO last week — which values it at more than $100 billion, more than the market capitalizations for either General Motors or Ford Motor Company — is testament to the power of procurement in driving the EV transition.

There’s no question in my mind that Amazon’s aggressive order of more than 100,000 Rivian vehicles two years ago for its delivery fleet was an important milemarker in this journey. And as Amazon is Rivian’s biggest shareholder, with a 20 percent stake, it also stands to profit handsomely.

The timing of Rivian’s IPO was particularly auspicious and symbolic: It came the same day that 15 countries — including Canada, the United Kingdom, Chile and New Zealand — proclaimed during COP26 that they will work toward 100 percent zero-emission new heavy-duty truck and bus sales by 2040. (The U.K. also coordinated a similar declaration focused on passenger cars and vans.)

The memorandum of understanding (MOU) was endorsed by a number of leading manufacturers that stand to benefit (including BYD, Proterra, Scania and Volta) and two big fleet operators, DHL and Heineken.

At the heart of the answer to this is a can-do attitude, an innovative approach and an imagination.

“For the first time, we have a unified target, supported by leading governments and industry, for when new trucks and buses should fully transition to zero-emissions technologies,” said Cristiano Facanha, global director for CALStart, in a statement. (CALStart organized the global MOU, along with the Netherlands government.) “Globally, freight trucks and buses represent about 4 percent of the on-road fleet globally but are responsible for 36 percent of greenhouse gas emissions, and over 70 percent of nitrogen oxide emissions that contribute to local air pollution. This makes trucks and buses a very effective target for fast decarbonization.”

According to the organizers, 570 models of trucks and buses already are available on the market to help the pledging countries and organizations to deliver on this target. Swedish truck maker Scania anticipates having a Class 8 model, capable of hauling 40 tons for up to four hours at highway speeds before being charged, on the road by 2023.

“Now, it’s just about adoption and making it the rational choice for our customers,” said Andreas Foller, head of sustainability for Scania, which participated in a number of COP26 side events last week, including the RouteZero discussion hosted by The Climate Group.

Ezgi Barcenas, chief sustainability officer of Anheuser-Busch InBev, said the beverage company counts about 9 percent of its emissions from its logistics operations, which are largely logically managed.

“That gives a lot of ability to work with partners on the ground to pursue innovation, to co-design, to create that local demand,” she said during the RouteZero event. “I think that, for us, has been really key in how we are tackling this and how we’re closer to the problem, but therefore, that puts us closer to the solution as well.”

Changes in the distribution model have also been important for PepsiCo’s fleet operation, one of the largest private fleets in North America with over 1 billion miles traveled in 2020. Those 60,000 “assets” account for roughly 2 percent of the company’s carbon footprint, according to Roberta Barbieri, vice president of global water and environmental solutions, who also spoke during RouteZero. If you include logistics partners in those calculations, that amount leaps up to 14 percent. “For me, working with third-party logistics carriers is as important as what we do in our fleet, and the solutions are the same,” Barbieri said. Right now, a small fraction of what PepsiCo uses is electric; it has made a bet on compressed natural gas, with close to 40 percent of the company’s Frito-Lay fleet using that technology today.

The biggest gating factor for this transition today is “infrastructure, infrastructure, infrastructure” (as Barbieri notes) — and a refrain that shouldn’t be all that unfamiliar to any organization or team actively strategizing about this transition. That applies to the materials available for batteries, securing appropriate locations across distribution networks for charging stations and ensuring enough electricity transmission capacity to support that demand. Scania has addressed this by providing tailor-made infrastructure that comes with its electric trucks. “You are talking about years to invest in the grid in the way we need. This is not personal cars, this is really heavy trucks,” Foller noted.

To make the capital investments in new trucks and infrastructure more bankable, the sector needs clearer government policy — such as the new commitments announced at COP26 — along with incentives for research and development activities.

“We need proper taxation of the [environmental] damage that is done along with subsidies for innovation,” said Christopher Hurst, director-general of the European Investment Bank (EIB). “When you have that packaged together, then a bank can see that it’s going to get its money back. Because at the end of the day, you either need an equity investment to take risk at an early stage or, if you are a bank like my own, you need to have a framework so that you can see where you are going over the next 10 years. So that you can see that there is a revenue stream that is going to pay you back.”

What other factors could assist with adoption? EIB’s Hurst suggested that making information available to consumers about the impact of various shipping methods — highlighting companies that are leading the journey to zero-emissions transportation — could help nudge more of the sector in the right direction. “I think if you had proper information, proper monitoring throughout the supply chain that would also give an incentive for people who are contracting trucking companies to put pressure on the trucking companies to be the ones to adopt those technologies.”

It’s increasingly clear that this transition will require a whole-systems approach — one that also includes considerations such as skills training and other resources for the people who will be at the heart of pulling off this shift.

“At the heart of the answer to this is a can-do attitude, an innovative approach and an imagination,” said Graeme Dey, transport minister for Scotland, suggesting that charging infrastructure could be designed to provide better facilities for the drivers behind the wheels of these heavy-duty, zero-emissions vehicles.

“Yes, we believe in the science, the innovation, the technical aspect of it, but I feel like we should also be looking at the social norms, the status quos and the behavioral science and how we create the nudges for the companies, for the consumers,” observed Barcenas. “If we don’t start thinking about these things in three dimensions — it’s not just my value chain, but it’s the value constellation around it.”

She described one potential scenario in which zero-emissions transportation carriers might receive access to more favorable delivery timeframes within particularly congested cities. “That is going to get the attention of a lot of companies, because we are all fighting for those good times, we don’t have parking slots … It’s not just the financial, it’s not just the enabling policy environment, but the smaller incentives that we don’t really look at.”