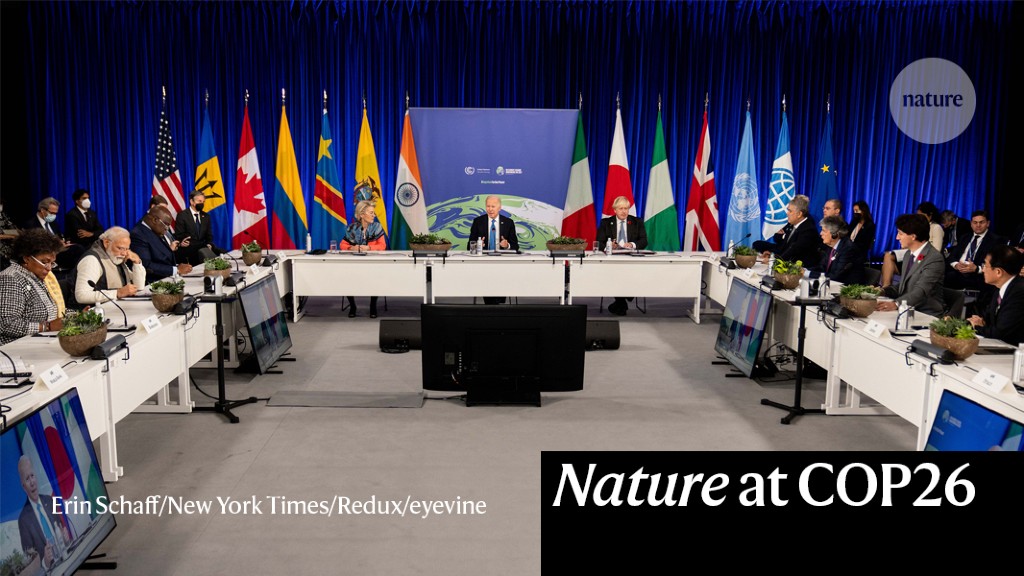 Government ministers at the 26th United Nations Climate Change Conference of the Parties (COP26) have reached a deal on further steps to reduce greenhouse gas emissions after discussions overran by 24 hours.

On 13 November, representatives from nearly 200 countries agreed the final text of the deal, which pledges further action to curb emissions, more frequent updates on progress and additional funding for low- and middle-income countries. 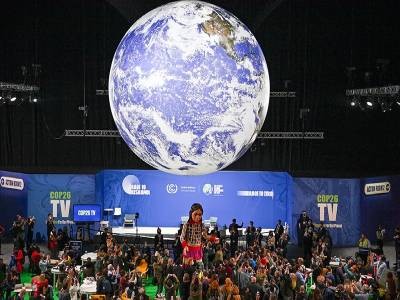 Researchers have expressed relief that the meeting did not fail to produce an agreement, but some left COP26 dissatisfied at the lack of stronger commitments to reduce emissions, and failure to agree “loss and damage” finance for countries that are vulnerable to climate change.

“COP26 has closed the gap, but it has not solved the problem,” says Niklas Hoehne, a climate researcher at Wageningen University in the Netherlands. He adds that countries now need to come forward with more ambitious pledges to tackle climate change, he adds.

The final 11-page document, called the Glasgow Climate Pact, says that greenhouse gas emissions must fall by 45% from 2010 levels by 2030 for global warming to be maintained at 1.5 °C above pre-industrial levels. It notes that, under existing emissions reduction pledges, emissions will be nearly 14% higher than in 2010 by 2030.

Countries acknowledged the need to reduce emissions faster, and also agreed to report on progress annually. For the first time in a COP text, nations agreed to begin reducing coal-fired power (without carbon capture) and to start to eliminate subsidies on other fossil fuels.

However, following objections from China and India, a promise in earlier drafts of the text to “phase out” coal was changed to “phase down”.

India’s climate and environment minister Bhupender Yadav told the conference that richer nations should not expect poorer countries to stop subsidizing fossil fuels such as gas. The lowest-income households rely on these to keep energy costs down, he said. 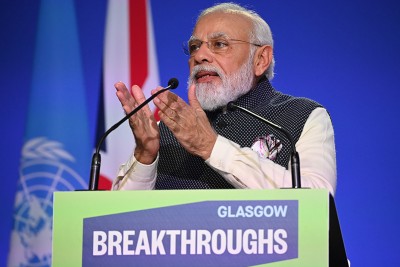 The deal also includes commitments from some countries on ending deforestation, reducing methane emissions and a pledge from the financial sector to move trillions of dollars of investments into companies that are committed to net-zero emissions. However, modelling suggests that the promises will still not be enough to limit global warming to 2 °C above pre-industrial levels, the goal stated in the 2015 Paris climate agreement.

If countries meet their 2030 targets, global temperatures will still rise 2.4 °C above pre-industrial levels by 2100, according to an analysis by Hoehne and colleagues that was published on the website Climate Action Tracker during the first week of COP26.

“We are well aware that ambitions have fallen short of the commitments made in Paris,” COP26 president Alok Sharma told the conference in a speech shortly before the negotiations concluded. “We have kept 1.5 degrees alive. But its pulse is weak, and it will only survive if we keep our promises and translate commitments into rapid action.”

Charlie Gardner, a conservation biologist at the University of Kent, who joined demonstrations outside the conference with the protest group Scientist Rebellion, says more radical action is needed, such as ending fossil fuel production more quickly and transitioning economies away from constant growth.

The issue of climate finance — funding from wealthy nations to help low- and middle-income countries transition away from fossil fuels — was heavily discussed during the meeting.

There was considerable anger over the failure by high-income nations to meet an earlier pledge to provide $100 billion in climate finance annually from 2020. “The message coming out of this COP is every country for themselves,” says Sara Jane Ahmed, a climate-finance researcher who advises the finance ministers of the V20, a group of 20 countries that are vulnerable to climate change. 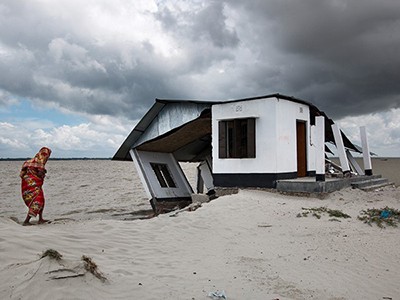 However, the Glasgow Climate Pact includes a commitment to double ‘adaptation finance’ — funding to help the lowest income countries improve climate resilience — to $40 billion by 2025. This form of finance is currently around a quarter of the $80 billion climate finance available every year to low- and middle-income countries.

The deal also commits to continue work on a definition of climate finance that would be acceptable to all countries. This is essential if trust between developed and developing nations is to be regained, says Clare Shakya of the International Institute of Environment and Development, a London-based think tank. At the moment, different countries define climate finance in different ways. For example, some count development aid (which might include funding for clean water or schools) as climate finance. Some countries also count loans as climate finance, whereas others say climate finance should be provided as grants.

Nations failed to agree on whether to create a “loss and damage” fund, a kind of insurance policy which would compensate climate-vulnerable countries for damage resulting from emissions that they did not create. But the COP26 deal includes plans for an office connected to the United Nations — known as a technical assistance facility — that will continue to research the idea.

“On the ground, it is clear that countries are suffering loss and damage from climate change as we speak, and these costs are being borne disproportionately,” says conservationist Malik Amin Aslam, an advisor to Pakistan’s COP26 delegation. He is confident that such a fund will be created eventually, but thinks that there will be many more discussions first.

The price of carbon

COP26 negotiators also finalized the rules that govern international cooperation and carbon markets, ending a prolonged debate over how to implement this part of the Paris climate agreement. The new rules create an accounting system that is intended to prevent double-counting of emissions reductions. When one company or country invests in emissions reductions that take place in another, for example, the new framework ensures that the reductions are only recorded once when reported to the United Nations. 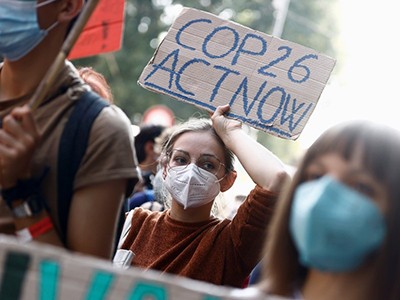 Most scientists and environmentalists applauded the outcome. “It’s basically as good as one could hope for,” says Robert Stavins, an economist at Harvard University in Cambridge, Massachusetts. A common accounting framework will enable separate trading schemes, such as those currently operating in Europe, China and parts of the United States to connect with each other, creating a more international market.

But although the final text references the rights of indigenous peoples who manage vast tracts of threatened tropical forest, some activists have questions whether the new rules go far enough. “We will have to watch closely the implementation of this new carbon scheme, as references to the rights of Indigenous peoples are relatively weak,” says Jing Corpuz, an Igorot lawyer and chief policy lead of the organization Nia Tero. “The good news that we have more protections than we would have had under the rapidly growing voluntary carbon market.”

A recent analysis of the climate commitments put forward before COP26 estimated that the world would save around $300 billion annually by 2030 if a global carbon market were in place1. If those savings were reinvested climate mitigation, it would more than double the projected annual emissions reductions in 2030, says Jae Edmonds, a climate scientist at the US Department of Energy’s Pacific Northwest National Laboratory in College Park, Maryland. “There are tremendous opportunities here,” Edmonds says.

Although COP26 resulted in a final deal, the meeting drew criticism that many representatives of different non-governmental groups — including researchers — were prevented from observing the discussions.

There were nearly 12,000 such representatives categorized into nine constituencies, such as business, young people and researchers. Tracy Bach, an environmental lawyer who co-leads the researchers’ group Research and Independent Non-Government Organizations, says that for much of the conference only one representative from each constituency was allowed to observe negotiations inside the rooms. At previous COP summits many more observers have been permitted, she says.

The UK government had previously said that COP26 was the most inclusive COP summit ever, because around 40,000 people (including government delegates) were allowed to attend, compared to the 22,000 at COP25 in Madrid. “Most observers came to COP to engage in the negotiation process,” Bach says. “Giving more people a badge [to enter the conference centre] without letting them directly observe the negotiations is not engagement, and does not make this COP necessarily more inclusive,” she adds.

Patricia Espinosa, who heads the UN climate convention secretariat in Geneva, told the meeting that the experience of observers at COP26 will be reviewed immediately “to reflect on how we can ensure greater inclusivity moving forward”.

My international-student group helped me through a hurricane