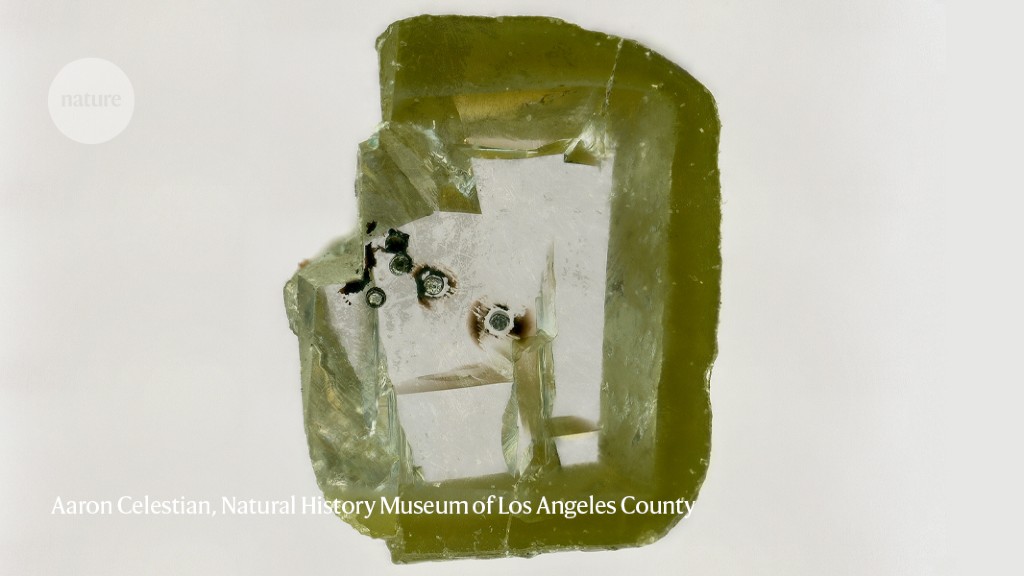 Small black specks in a diamond from a Botswanan mine have turned out to be a vital ingredient of the deep Earth, identified in nature for the first time after decades of searching.

The mineral forms at high temperatures and pressures in Earth’s mantle, and normally cannot exist on the surface. But these particular specks were embedded inside a diamond that ferried the mineral intact from deep inside the planet (O. Tschauner et al. Science 374, 891–894; 2021).

The researchers who discovered the mineral named it davemaoite after Ho-kwang ‘Dave’ Mao, a scientist who made many pioneering discoveries in high-pressure geochemistry and geophysics. Davemaoite is mostly calcium silicate, but it can scavenge radioactive isotopes of uranium, thorium and potassium, which produce heat as they decay. This means the mineral plays a major part in heat flow deep inside Earth.

The davemaoite in the diamond has a perovskite crystal structure that forms only at the temperatures and pressures that exist between 660 and 900 kilometres deep. Scientists had synthesized it in the laboratory, and had theorized that it should be one of the main components of the lower mantle, but had never conclusively seen it in geological samples before.

After nearly ten months without appointing a permanent commissioner, US President Joe Biden has nominated Robert Califf (pictured), a former head of the Food and Drug Administration (FDA), to lead the regulatory agency again.

The FDA has been plagued by a series of missteps in the past decade — ranging from its approval of controversial drugs to perceived bowing to political pressure — that have undermined public confidence in it. Experts say that Califf will need to prioritize restoring trust in the beleaguered agency if he’s confirmed by the US Senate.

A cardiologist, Califf had a long career at Duke University School of Medicine in Durham, North Carolina, where he founded the Duke Clinical Research Institute, the world’s largest academic clinical research centre. Since leaving the FDA in 2017, after less than 11 months as commissioner, he has led clinical policy and strategy at Verily, the life-sciences spin-off from Google’s parent company, Alphabet.

Georges Benjamin, executive director of the American Public Health Association, an organization for US public-health officials in Washington DC, says that Califf is a shrewd choice. “He won’t make some of the same rookie mistakes that someone who’s never been in the agency might make.”

Pandemic takes its toll on researcher productivity and mental health

The COVID-19 pandemic has dented researchers’ productivity and mental health, according to surveys of scientists in Europe and the United States. But the full impact might not be felt for years.

When the first poll was conducted in April 2020, scientists were already spending less time on research than before the pandemic. But in January 2021, when Wang’s team conducted another poll, they found that this effect had largely abated (see ‘Productivity problems’).

The more recent poll also found that output fell for many last year, compared with 2019. Scientists who do not work on COVID-related projects reported that their new publications and submissions dropped by 9% and 15% during 2020. More troubling, says Wang, is that scientists launched fewer research projects overall in 2020, with an average drop of 26% compared with 2019.

Psychological factors could be at play. Under stress, Wang says, people have “tunnel vision, trying to focus on one thing instead of looking more broadly”.

The results of a separate survey paint a bleak picture of academics’ mental health, which researchers say could be affecting their enthusiasm to start new projects. Two thousand staff at UK higher-education institutions were surveyed in March and April this year by Education Support, a London-based charity. Nearly two-thirds reported feeling emotionally drained at least once a week, and more than one‑quarter of respondents said they felt that way every day.

How protein-based COVID vaccines could change the pandemic