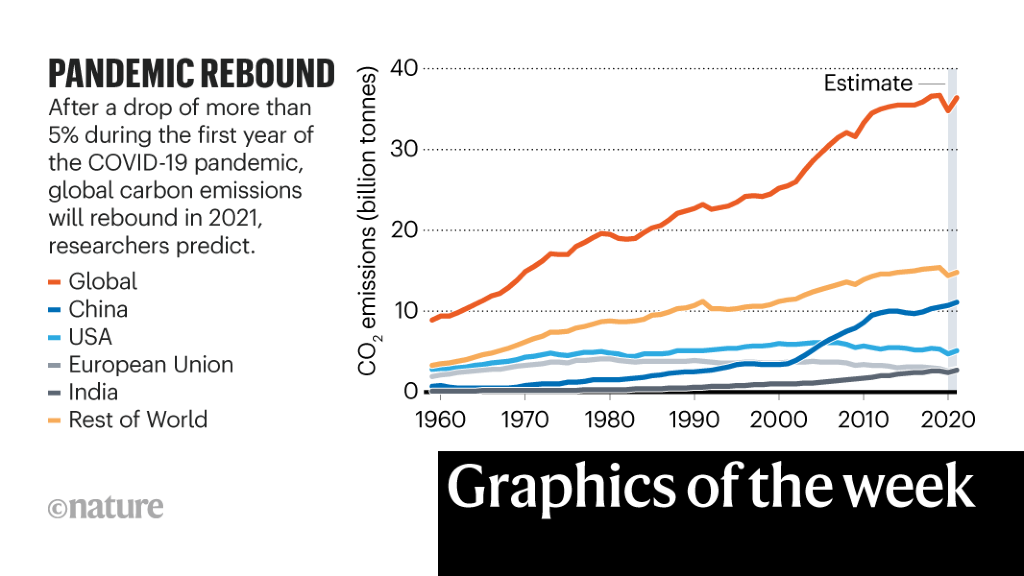 As world leaders and scientists discuss how to avert catastrophic climate change at the COP26 meeting in Glasgow, this striking graph puts our current situation in perspective. It shows changes in the Earth’s global temperature over the past 24,000 years.

A team of researchers combined climate models with proxy data — obtained indirectly through palaeoclimate records such as ocean sediments — to work out the evolution of the difference in the global mean surface temperature relative to the average for the pre-industrial period of the past millennium (1000–1850). The shaded area represents a 95% confidence interval.

If confirmed through further studies, write the authors of this News & Views article, the results imply that modern warming is extraordinary compared with that of the past 10,000 years — adding weight to a similar conclusion made in the most recent report from the Intergovernmental Panel on Climate Change.

Carbon dioxide emissions on the up

The abrupt decline in global carbon dioxide emissions during the COVID-19 pandemic, caused by government-mandated lockdowns, will be all but erased by the end of this year, a consortium of scientists reported this week. It predicts that carbon emissions from burning fossil fuels will rise to 36.4 billion tonnes — an increase of 4.9% — in 2021 compared with last year. The rapid rebound, driven in part by the increasing demand for coal in China and India, suggests that emissions will begin to rise anew next year without substantial government efforts to bend the curve.

The menu of COVID vaccines is set to expand as a spate of protein-based ones go through clinical trials. To elicit a protective immune response, these shots deliver proteins, along with immunity-stimulating adjuvants, directly to a person’s cells, rather than supplying a fragment of genetic code that the cells must read to synthesize the proteins themselves. Most of the protein-based vaccines currently in testing have been crafted around some version of the coronavirus SARS-CoV-2’s spike protein. This graphic walks through how the vaccines are produced and trigger an immune response.