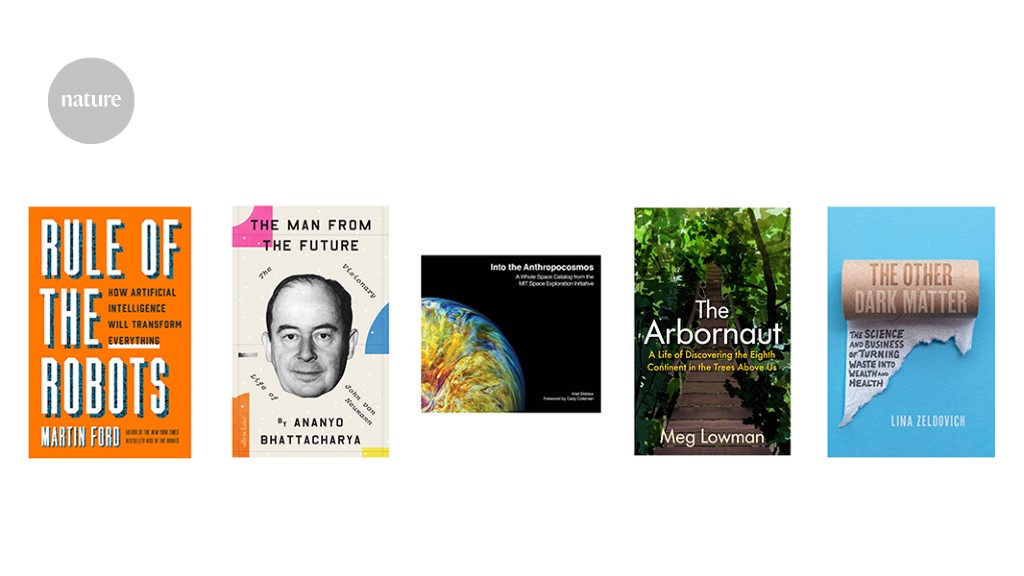 The Other Dark Matter

Sewage is the subject of this original, necessary book, which several publishing houses rejected because of the “yuck factor”, notes journalist Lina Zeldovich. Her lifelong interest stems from her scientifically trained Russian grandfather, who annually recycled the family’s septic tank onto their farm, treating the contents as dobró — ‘rich’. Zeldovich describes a growing global awareness of how human waste can become sustainable energy source, organic fertilizer and medical therapy.

For centuries, the health of trees — even the tallest — was assessed at eye level. Today, more than half of terrestrial creatures are known to live 30 metres or more above our heads, notes tree-climbing biologist Meg Lowman, an “arbornaut” since the 1970s. Her wonderfully informative and evocative memoir explores the “eighth continent” of tree canopies from ropes and walkways, cherry pickers, hot-air balloons, cranes and drones. Her project Mission Green aims to conserve high-biodiversity canopies through local forest stewardship.

Rule of the Robots

According to software developer Martin Ford, artificial intelligence (AI) will probably transform society faster than electricity did, but with unpredictable effects. His well-informed study notes a 2016 forecast that within five years, radiologists would be overtaken by advances in AI. But that hasn’t happened: AI cannot currently integrate key information from sources such as clinical notes. AI’s future, Ford concludes, lies somewhere between the science-fictional extremes of utopian Star Trek and dystopian The Matrix.

This lavishly illustrated book chronicles the MIT Space Exploration Initiative, founded by Ariel Ekblaw, which develops tools and projects “to truly make space for everyone” says astronaut Cady Coleman’s foreword. Ekblaw says the project is “grounded” in the Earthrise image taken by Apollo 8, reinforcing humanity’s responsibilities as citizens of the planet. The space experiments depicted range from biology and engineering to cookery and music, including social robots to relieve astronauts’ isolation.

The Man from the Future

Hungarian-born mathematician John von Neumann influenced many fields. In 1927–32, he helped to found quantum mechanics. During the Second World War, he was key to the atomic-bomb effort. Later, he co-designed the first programmable electronic digital computer, was an AI visionary and introduced game theory into political science, military strategy, psychology and evolutionary biology. Excellent on the science, Ananyo Bhattacharya’s ambitious biography struggles to portray the conflicted human.

The author declares no competing interests.

Why I swapped the piano for pipettes

How pirouettes and pliés prepared me for a research career

Collaborations with artists go beyond communicating the science

Why I swapped the piano for pipettes

The lesson of talk over tea and cakes? Local research matters