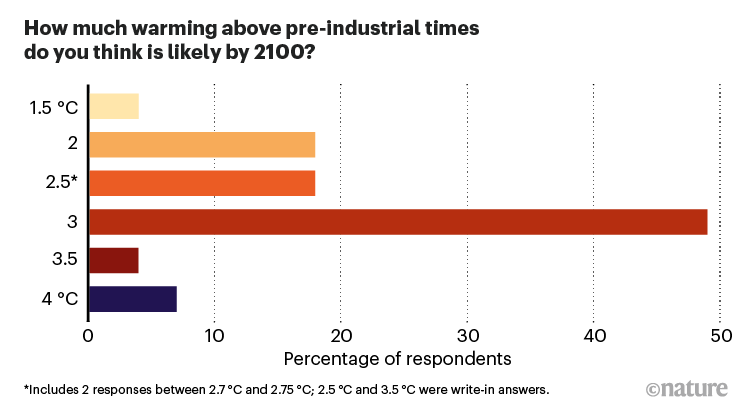 The momentous COP26 climate summit now under way in Glasgow, UK, represents one final opportunity for the governments of the world to craft a plan to meet their most ambitious goals for curbing climate change. Pledges are already flowing in, but the meeting has another week to run and much is still to be decided. Ahead of the summit, Nature conducted an anonymous survey of the 233 living authors of a climate-science report published in August by the Intergovernmental Panel on Climate Change, and received responses from 92 scientists — about 40% of the group. Their answers suggest strong scepticism that governments will markedly slow the pace of global warming, despite political promises made by international leaders as part of the landmark 2015 Paris climate agreement. Six in ten of the respondents, for example, said that they expect the world to warm by at least 3 °C by the end of the century, compared with conditions before the Industrial Revolution. That is far beyond the Paris agreement’s goal to limit warming to 1.5–2 °C.

A shocking lack of COVID-19 vaccines in Africa, and the cost of existing treatments, means the continent really needs affordable, readily available COVID-19 drugs. These could reduce COVID-19 symptoms, lower the burden of disease on health-care systems and reduce deaths. The pandemic has given clinical research in Africa a boost: the Pan African Clinical Trials Registry recorded more clinical trials in 2020 than in 2019, and the number for 2021 is also on track to exceed 2019. But trials of COVID-19 drugs are still lacking in Africa, where they face infrastructure and recruitment challenges. One solution could be to establish a body to coordinate treatment trials on the continent.

The gluttony of whales

How much do baleen whales, the largest known animals that have ever lived, eat? Three times as much as previously thought, report researchers who used cameras to study seven species of baleen whale. Writing in Nature, the researchers also suggest a feeding cycle involving iron and whale poo that could explain how such gluttony is possible. When whales eat iron-rich prey such as krill, they use the prey’s protein to make blubber — and defecate the iron-rich remains. Whale faeces might then provide a source of iron for microscopic marine algae called phytoplankton, and drive blooms of a type of plankton called diatoms. Diatoms, in turn, can move iron along the food chain when they are eaten by krill, which also excrete iron. Whales can further aid iron availability by mixing ocean waters through their vigorous tail movements.

A whale of an appetite revealed by analysis of prey consumption

When are masks most useful? COVID cases offer hints