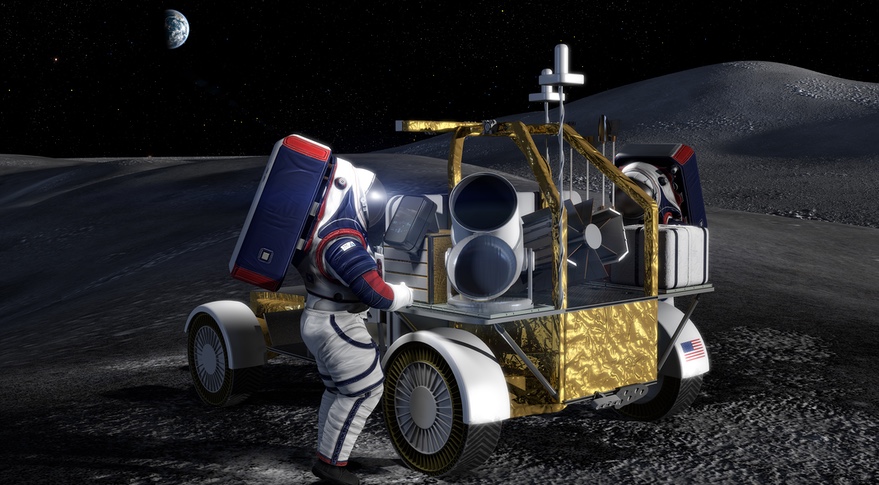 LAS VEGAS — An industry team led by Northrop Grumman has unveiled the design of a lunar rover it proposes to develop for NASA’s Artemis program.

Northrop Grumman announced Nov. 16 that it is working with four other companies, ranging from a commercial lunar lander developer to a manufacturer of automobile tires, to propose a lunar rover to NASA.

“Along with our partners, we are providing NASA with a vehicle design to greatly expand and enhance human and robotic exploration of the lunar surface and further enable a sustainable human presence on the moon and ultimately Mars,” said Rick Mastracchio, director of business development for human space at Northrop Grumman and a former NASA astronaut.

Northrop would lead development of the proposed rover, using its experience on various spacecraft projects. Its partners include Intuitive Machines, which will develop an upgraded version of its Nova-C lander, called Nova-D, to deliver the rover to the lunar surface. Lunar Outpost, a company developing a small robotic rover called MAPP that will go to the moon on a Nova-C lander in 2022, will apply its experience developing that rover to this project.

The team also includes companies from the automotive industry. AVL, a company that works on development, simulation and testing of vehicles, will provide expertise in working on electric vehicles and autonomous driving technology. Michelin, the tire manufacturer, will provide an “airless tire solution” for the rover.

The companies provided few technical details about the rover. However, it expects the rover to be able to both be driven by astronauts and also remotely controlled, and to operate for up to 10 years. They did not disclose the size of the rover, but the Nova-D lander is designed to carry payloads of up to 500 kilograms to the lunar surface.

Northrop is not the only company to announce plans for a lunar rover. In May, Lockheed Martin announced a partnership with General Motors to work on the design of an Artemis lunar rover. The companies said they would combine Lockheed’s experience in space systems with GM’s capabilities in electric vehicles and autonomy for the rover concept, still in its early stages.

It’s unclear, though, when NASA might select Northrop’s rover or an alternative design as an unpressurized rover to support Artemis missions. In August, NASA issued a request for information seeking input on a lunar terrain vehicle (LTV). NASA was particularly interested in how companies could design rovers to survive an extended lunar night, operate for up to 10 years and how the landers would be delivered to the lunar surface. It also asked companies to consider the feasibility of offering the landers to NASA as a commercial service.

“Most people do a lot of research before buying a car,” said Nathan Howard, project manager for the LTV at NASA’s Johnson Space Center, in a statement when the RFI was released. “We’re doing extensive research for a modern space vehicle that will be provided by industry.”

Responses to the RFI were due to NASA Oct. 1. The agency hasn’t announced when it will seek formal proposals for the LTV, or when it expects the rover to be delivered to the moon.