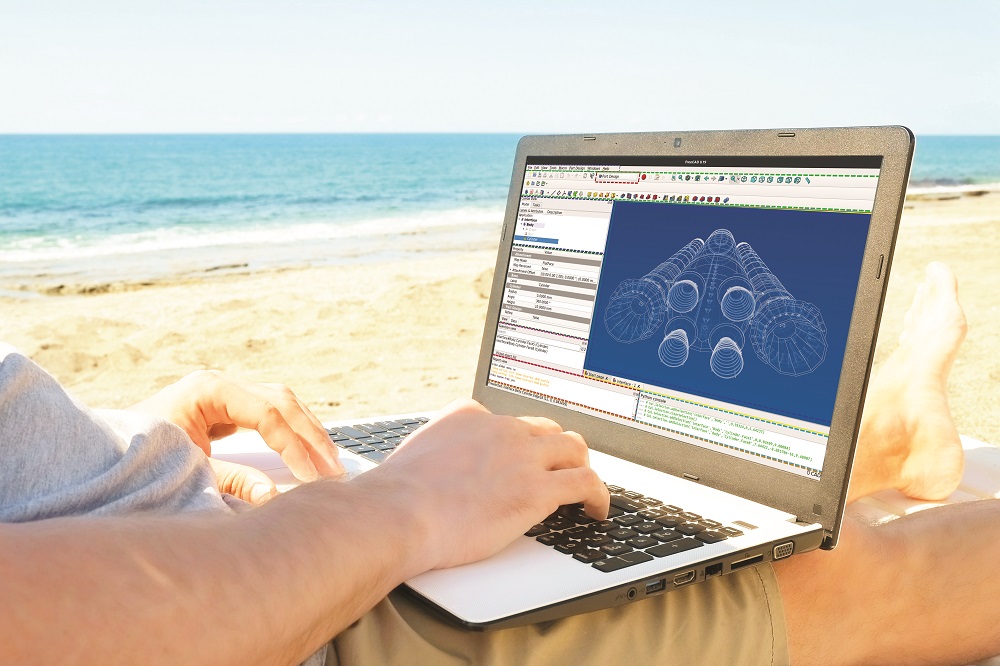 Evona has offered employees the flexibility to work remotely since the space recruitment startup was founded in Bristol, England, in 2018.

The policy was a departure from strict management in the founders’ previous jobs. Plus, they thought it would give them a competitive advantage.

“We were a startup, and we needed to attract the talent against the big guys,” said Evona co-founder Tom Kelly. “So, we said, ‘If you want to work from a beach in Spain, you have that flexibility.’”

In 2018, remote work was not the norm for jobs outside the tech sector. Space companies employed remote software engineers and data analysts, but most people reported to offices, laboratories, factories or facilities designed to safeguard classified information.

“It required a catalyst like a global pandemic to prove across many different job functions and industries that it was possible to work remote and do it in a productive way,” said Justus Kilian, Space Capital and Space Talent founder. “That experiment has proven that many jobs, not all, but many jobs can operate in a remote way.”

“Even the roles that require the employee to be on-site for the majority of the week are now increasingly offering some level of flexibility and autonomy to their staff,” said Adele Fox, Evona’s marketing director. “Very few seem to be demanding that their employees are onsite 100 percent of the working week, even when working with specialist tools.”

Some space company leaders are embracing the trend toward remote work. Others caution against it. In any case, the pandemic has changed the calculus for current and prospective employees.

After working from home for months or even years during the pandemic, some people realize how much they enjoy working alongside colleagues, while others now resist the idea of commuting or following rigid work schedules.

Employers need to understand “this remote work shift” and figure out how to stay competitive, Killian said.

Earth-imaging company Satellogic had a globally distributed workforce before the pandemic, which allowed the company to shift quickly to remote operations.

Remote operations “helps increase the talent pool,” said Emiliano Kargieman, Satellogic CEO and co-founder. Satellogic employees still work side-by-side building satellites, and the company has retained offices because “not everyone has a quiet room in the house where they can work,” Kargieman said.

Istvan Lorinc, Morpheus Space co-founder and president, is not a fan of remote work.

“That was a solution for a state of emergency and not a permanent good thing,” Lorinc said. “Imagine how much experience and knowledge is not being transferred because of remote work. In time, if this continues, the quality of work will decline.”

Most companies have a mix of remote and on-site work.

Since Novawurks was founded in 2011, people who needed to work outside the office have done so. “Of course, when they need to touch hardware, they come in,” said Talbot Jaeger, Novawurks founder and chief technology officer.

AAC Clyde Space performs more work remotely than it did before the pandemic.

“Of course, we have eight satellites in the cleanroom, and someone has to actually build them,” said Luis Gomes, AAC Clyde Space CEO. “Some tasks have to be done in the facility. You can’t hire a civil engineer from South America to work remotely. Design engineer? Yes. And we have done that.”

“Hardware being built, especially classified hardware being built, most of that is an on-site activity,” said Matt Magana, Raytheon Space Systems vice president. “Then, there is a lot of classified development work. We’ve done a lot to separate classified and unclassified to allow us to build a more flexible workforce because I can’t ask somebody to come into a classified area and sit in there for eight hours a day, seven days a week. The environment has changed now.”

Early in the pandemic, many satellite and rocket manufacturers, as well as suppliers, were designated as critical infrastructure.

“That forced companies to differentiate who is required to be on premise versus who is providing some sort of support and can work remote,” Kilian said. “I think we’re going to see a continuation of that. It’s hard to compete in a world where people have seen the benefits of working from home and not having to commute. To pull that back is very challenging.”

Fox agrees. “What we’re hearing constantly from candidates is because they’ve been working remote, because they can see their life-work balance split is better, that’s what they are demanding,” Fox said. “Companies that say to them you are 100 percent on-site are going to struggle to compete in a marketplace where there aren’t enough qualified people to fill the roles that we have in the space sector as it is.”

For employers who worry people offsite will not be as productive, Kelly has seen the opposite.

“As long as you hire the right people with the right motivations and allow them to work in their way, the results go through the roof,” Kelly said. “We are pushing this message as much as we can to our clients. There is certainly still a resistance, but it’s a lot better since the pandemic.”

Despite the trend toward remote work, many employers would rather interact with employees face-to-face.

“We don’t have an issue with remote work, but we do love to get together,” Jaeger said. “We have a lot of fun together.”

In addition, there are times when remote work isn’t advantageous.

Leaders of early-stage startups, for instance, often work closely together.

“There is a lot of value to having close proximity to your co-founders,” Kilian said. “You can make decisions very quickly [and] be very action-oriented.”

Even later-stage companies are planning retreats and other ways to bring employees together.

After a couple of years of extensive remote operations, Satellogic is now “trying to push in the opposite direction and get employees together physically as much as we can,” Kargieman said. “There’s obviously a portion of being in the flesh, in the same room that just can’t be fully replaced by remote work.”

This article originally appeared in the September 2022 issue of SpaceNews magazine.