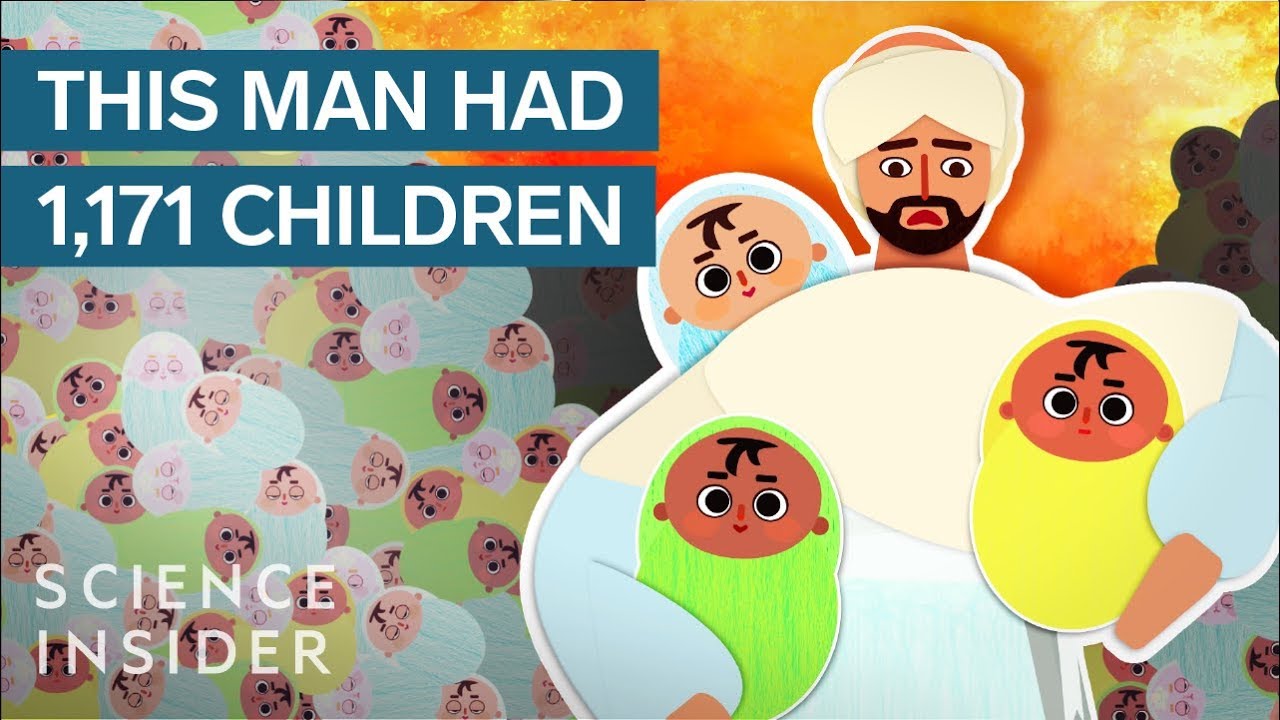 Video
How many kids can you have? Moulay Ismail set the record with at least 1171 children. But it’s different for men and women. Having children for women takes about a year, if you count the pregnancy and recovery time. For men, there is less time and resource investment, so they can have many more children. How many children men can have depends on the health of their sperm and other factors like how many women they can reproduce with.

Imagine having so many children, you could run a factory. That’s what Moulay Ismail’s family looked like. He was a brutal emperor of the Moroccan Alaouite dynasty from 1672 – 1727. And is reported to have had at least 1171 children.

But he wasn’t the only one who used his power to have sex with any woman, whether she was interested or not. Other rulers like Augustus the Strong and Genghis Khan had hundreds of children. And while these were some of the more ruthless rulers of their time it raises a more fundamental, scientific question.

Women can reproduce for about half of their lifetime and can only give birth about once every year or so. So it makes sense that women can only have a fraction as many children as men. One study estimated a woman can have around 15 pregnancies in a lifetime. And depending on how many babies she births for each pregnancy, she’d probably have around 15-30 children.

But the “most prolific mother ever,” according to Guinness World Records, was Mrs. Feodor Vassilyev in 19th century Russia. She’s said to have given birth to 69 children over 27 pregnancies. It’s a lot for a woman. But nothing compared to Moulay Ismail, for example. According to records, he had 4 wives and 500 women in his harem.

But, there are factors not even an emperor can control. Like how a man’s sperm becomes less mobile and more abnormal as he grows older. Which ultimately reduces his chances of fathering children later in life. In fact, studies suggest that men over 50 have up to a 38% lower chance of impregnating a woman compared to men under 30.

For Ismail, he fathered most of his children relatively young. So, by age 57, he had an estimated 1171 kids. But, Moulay Ismail isn’t the only man in history with tons of progeny.

Augustus the Strong, who was king of 18th century Poland, had a long distance relationship with his wife. But that didn’t stop him from fathering a rumored 370 children by mistresses.

And Genghis Khan, notorious for conquering large areas of 13th century Asia, is estimated to have had between 1,000-2,000 children.
In fact, by tracking types of Y chromosomes, Scientists estimate that up to 16 million men today who live in regions that Khan conquered could be descendants of him or his close male relatives.

But did any of these men really reach that maximum humanly possible? Turns out, the records on Ismail only spanned 32 years of his life. By one calculation, he really could have had hundreds more. If you compare that to men in more modern times, the most “prolific” fathers today have up to about 200 children.

That’s nowhere near 1100 kids, and probably a good thing.

How Many Children Can A Human Have In A Lifetime?